Limerick on Monday evening offered a few delights. Roger went out to find a bike shop for a new seat post (his other one broke on the way up to Moll’s Gap on Day 1 and his saddle was being held on by cable ties for the whole of Day 2).

What he found was “The Bike Shop”, a real treasure-cave – a bike shop that sells everything from pink kids’ bikes with tassels on the handlebars to £3000+ racers; from the cheapest plastic helmets to the most expensive Kask and everything under the sun (sorry, cloudy sky!) in between. The owner was “enthusiastic but shambolic” owner, but despite the disarray in the shop he ferreted around in his spares box and was able to find one that fitted. Highly recommended.

We all had a lovely dinner together in the restaurant of The Pier Hotel and went off to bed to rest for Day 3.

We had a slightly staggered start this morning, with the main group setting off at about 8.30am. Ian, however, wanted to go to visit and photograph the magnificent Thomond stadium, shaped like a rugby ball, home of Munster rugby. Janet, meanwhile, held back for a few minutes to catch her daughter Emily being interviewed on Radio 1 – she’s a ball-girl at Wimbledon and is being the voice of what goes on “behind the scenes” for the Radio 1 listeners this week!

Today was wet, wet, wet, and we experienced rain of types 1 right through to 9 (see yesterday’s chart!) All the cyclists found it quite a tough slog but the Dunkirk Spirit prevailed as we all huddled under Shaun’s green pergola at our coffee stop at 25 miles to shelter from the Stair Rods (Irish Rain Type 9).

Ian maintained a continually upbeat demeanour and turned up dripping at every stop with a big smile on his face with “What lovely green lanes!”, “Isn’t The Burren fantastic!” and “There’s a lovely Post Office in Quin!” He definitely deserves today’s prize for smiling in the face of adversity. Peter and Richard, of course, were still complaining of the effect of the damp on their bells.

One highlight of the day was after the coffee stop, when we found ourselves cycling past a familiar sight and all had to stop for a photo. So did both the car drivers on that stretch of road so we had a bit of an Irish traffic jam (10 bikes and 2 cars) outside the gate paying homage to Father Ted’s house. 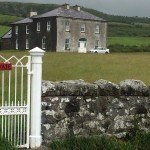 After the lunch stop (when it was blowing a hooley and we had to keep hold of the pergola in case it blew away in the direction of Donegal) we had a short-ish final stage of 17 miles into Galway. The final 5 miles were really challenging, with rain coming down in sheets and the wind blowing us in completely the opposite direction, but Kim was brilliant making sure we managed to find our way into the centre of Galway and the rather splendid Victoria Hotel where we were delighted to find all the rooms had baths so there was time for a well-earned soak.

Galway is a lively Irish town so we were able to find plenty of places to eat and to listen to live Irish music to entertain us for the evening.

Comment of the day:
“It’s not actually raining at the moment.”
“Give it 2 minutes…”

July 2015 Ireland End to End – 7th July – Day 3
We use cookies to ensure that we give you the best experience on our website. If you continue to use this site we will assume that you are happy with it.OkNoRead more
Revoke Cookies