After lots of rain overnight we were all a little nervous about the start of our big ride this morning. With an early breakfast at 7.15am (including not just black pudding, but also something known as white pudding too if you fancied it) we all piled back into the mini-bus for the 15-mile trip down to Mizen Head. The early shift (Shaun and Davy) had been up at 6am to get the van with the bikes down to the start point to set them up for us.

As we approached the most Westerly point of Ireland, we were slightly heartened by the sight of a double rainbow – although presumably this did mean that it was raining somewhere nearby!

We arrived at Mizen Head at around 8.15am and had a chance to check our steeds over after their trip on the ferry, to make sure everything was in order. This was our first chance to see all the bikes together and there was quite a lot of titanium and carbon on show – more of this on another day’s Blog!

Just before we started the wind was blowing a hooley and it was freezing cold, but we did get a shaft of sunlight as we set off after the obligatory photo. Unfortunately it didn’t last long, as we were “christened” by the legendary Irish rain about 5 minutes later, when a short sharp shower did its best to soak us all. I can report that Janet’s new Rapha jacket survived its first real challenge and kept out the damp. 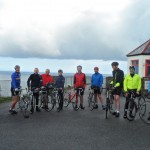 Before long, though, we were back in sunlight and cycling to our first stop (25 miles) at Bantry Bay harbour, where Shaun had set up the gazebo for a welcome cup of tea and lots of snacks to keep us going. We were very impressed with the way the van has been kitted out with its own little stove, with a proper kettle to make really hot drinks.

Also hanging around on the harbour front, we met another party, who turned out to be about 20 people from America and Canada who had come for a Sullivan-Daly family reunion, revisiting the place their ancestors had lived prior to escaping from the potato famine in the 1840s. It turns out that there are loads of American visitors at the moment, all using the 4th July holiday and celebrations to come back to reconnect with their Irish roots. 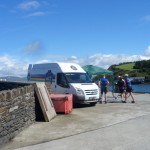 After that, loaded up with snacks, off we set, slightly dreading the 1st big climb of the tour – 5 miles kicking in just after Glengariff at mile 40. Luckily there were several well-placed bright pink signs along the way with pictures of bikes and encouraging messages to “keep going”. We were very impressed at how hard Shaun had been working to set these up along the way for us…but actually it turns out that there had been a big charity ride yesterday following some of the same route, and the signs were left over from that. Never mind – it was very encouraging as we made the big climb. As we got higher, we were treated to the most fantastic views of West Cork county where we’d just been. Then, and after a very short tunnel through the mountain, laid out in front of us was another wonderful view of the Sheen Valley – now in Kerry County.

Peter and Richard brought out the rear with witty aphorisms whereas John and Anne zoomed up the hills (and, possibly rather dangerously fast, down them too) on the tandem, although the rest of the team teased that Anne had unclipped her shoes and was reading the Sunday Times on the back whilst John did all the work. Of course this was a cruel travesty and in fact Anne was clearly the power-house of the pair.

Throughout the day we saw truly beautiful scenery – reminiscent of North Cornwall, Dartmoor, the Scottish Highlands, New Zealand (Roger’s suggestion), the Isle of Man (Janet’s suggestion) and even the Lake District.

Lunch was at 54 miles in a layby just outside the town of Kenmore. Shaun again did us proud with ham and cheese rolls, tea, coffee, crisps, fruit and all sorts of lovely cakes. 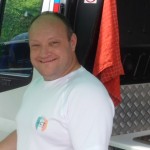 The sun was now out with a vengeance, and with a final 20 miles to go, we faced another climb to Moll’s Gap and then down a fantastic bending switchback road to the bottom of the valley floor and onto Killarney and our hotel for the night.

July 2015 Ireland End to End – 5th July – Day 1
We use cookies to ensure that we give you the best experience on our website. If you continue to use this site we will assume that you are happy with it.OkNoRead more
Revoke Cookies