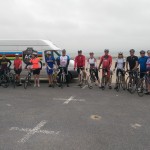 Starting from the west coastline of Belgium

Everyone was eager to get going and we departed from the west coast of Belgium at 10am to begin our first days cycling.

It was known that the first day would be the easiest but this was great as it gave the group plenty of time to chat and really get to know one another. Given the ease of cycling on the first day, we went with a one stop strategy but wow!!!

What a stop it was, Tyne Cot Commonwealth War Graves Commission, the final resting place of nearly 12,000 men who lost their lives in the first world war, very sobering as nearly 8,500 are unamed.

After a hearty lunch provided by the lovely Amanda and the not so happy Martyn (who wanted to be on his bike but, alas, he was destined to be the van driver for this tour) we set off for the second 30 miles……. the highlight being Fiona deciding to not take the cycle path over the road bridge and, instead, create a convoy of vehicles by deciding to take the road option. 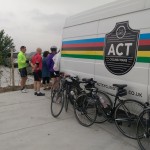 Quotes from the riders……. Road the easiest 62mls today. Completle flat. Was like cycling in the fens. Not really alot went on today apart from a lot of talking,chin wagging….. you didnt have to look to see if Lauren was at the back as you could always hear her from the front!!!. Martyn (white van man) was a very welcomed stop at a very poinient stop.

After hearing the bells we met up for well deserved pre dinner drinks and enjoyed a good supper…… LEJOG v Ireland have now united in Belgium 2015!!! 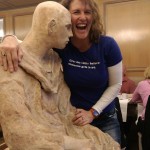 Lauren took a liking to Cesar 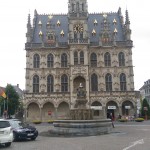 The main square in Oudenaarde

Belgium – Day 1
We use cookies to ensure that we give you the best experience on our website. If you continue to use this site we will assume that you are happy with it.OkNoRead more
Revoke Cookies